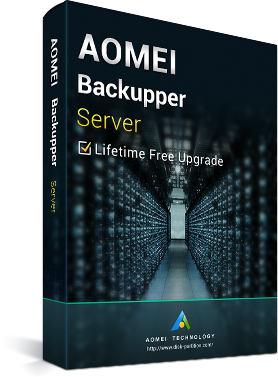 AOMEI Backupper Server, especially designed for small and medium sized business, is not only data protection & disaster recovery solutions, but also disk partition cloning software. With simple and easy-to-use interface, anyone even non-technical users can protect all of critical business data in minutes without having to be an expert. Besides, our stable and robust server backup software is able to backup your physical and virtual server without interrupting or shutting down Windows and other running applications.

"Lifetime Free Upgrades" is a maintenance agreement which enables you to FREE get every version of the software that comes out after you buy. No need to pay an additional fee for later upgrades.

Ensure Business Continuity - back up everything automatically or manually before system fails.

Support to run one time only everyday when setting up the event-triggered scheduling backups.

Support to choose a network mapped drive as the destination.

Support to simultaneously choose multiple files on the network drive as the backup source.

Support to prevent computer from going to sleep during the backup process.

Support to automatically invoke the tray notification icon to show backup or sync progress if users close the main window, and then continue to perform backup or sync task in the background.

Optimized the characters of share information to unlock "System Clone" function in the Standard Edition.

Optimized the solution to the destination path is too long when performing file backup and file sync.

Enhanced the stability to connect the Share/NAS.

Fixed issue: display error code 4107 when checking the image file after backing up to Share/NAS.

Fixed issue: "Failed to enable VSS......" during the backup process.

Fixed issue: the virtual partition is not accessible caused by access permission when exploring an image file.

Backup - easily protect your server all the time, both system and data

Files Backup: Specify which files or folders to backup, supporting to customize folders backup with filters.

Incremental & Differential Backups: Only back up data that changes made to save time and disk space.

Hot Backup: A technology enables to take a backup without interrupting or shutting down Windows and other running

Where can you store your backup images?

You can save the image files on:

Restore back everything you ever backed up in minutes

Clone - create an exact duplication of your system, partition and hard disk

Clone with Resizing: Adjust the size of partitions to fit the new destination location while cloning.

Sector by Sector Clone: Clone all sectors (both used sectors and unused sectors) to destination disk.

Hot Clone: A technology enables to clone system/disk without interrupting or shutting down Windows and other running applications.

Explore Image: Mount image as a virtual partition to browse the contents in Windows Explorer.

Split Backup: Divide a large image file into multiple smaller ones, or split to fit for fixed length media.

Check Image: Verify data integrity of image file to ensure it can be restored successfully.

Notifications: Send backup completion status to your email with AOMEI or your own SMTP server.

View Logs: View what operations the program has done and record the events that occur during a backup.

Export/Import Tasks: Export or import all backup tasks in an XML file.

Intelligent Sector: Choose to only backup used sector or backup all sector whether used or not.

VSS: Integrate with Microsoft Volume Snapshot Service to back up files that are in use.

* Display as RAW partition and perform a sector-by-sector backup mode.

Melissa Gohman
With faster backups and a glitch-free interface, this free imaging and backup program would've garnered another half-star.
Write a Review
Buy Now
This product can't be purchased in your country. Please choose other products.
The programe has been failed submitted to the system
The programe has been successfully submitted to the system